Obsessive compulsive disorder (OCD) is a mental health condition where a person has obsessive thoughts and compulsive activity.

An obsession is an unwanted and unpleasant thought, image or urge that repeatedly enters a person's mind, causing feelings of anxiety, disgust or unease.

A compulsion is a repetitive behaviour or mental act that someone feels they need to carry out to try to temporarily relieve the unpleasant feelings brought on by the obsessive thought.

For example, someone with a fear of their house being burgled may feel they need to check all the windows and doors are locked several times before they can leave the house.

OCD symptoms can range from mild to severe. Some people with OCD may spend an hour or so a day engaged in obsessive-compulsive thinking and behaviour, but for others the condition can completely take over their life.

It's not clear exactly what causes OCD, although a number of factors have been suggested. In some cases the condition may run in families, and may be linked to certain inherited genes that affect the brain's development.

Brain imaging studies have shown the brains of some people with OCD can be different from the brains of people who do not have the condition. For example, there may be increased activity in certain areas of the brain, particularly those that deal with strong emotions and the responses to them.

Studies have also shown people with OCD have an imbalance of serotonin in their brain. Serotonin is a chemical the brain uses to transmit information from one brain cell to another.

OCD affects men, women and children. The condition typically first starts to significantly interfere with a person's life during early adulthood, although problems can develop at any age.

People with OCD are often reluctant to seek help because they feel ashamed or embarrassed.

However, if you have OCD, there is nothing to feel ashamed or embarrassed about. It is a long-term health condition like diabetes or asthma, and it is not your fault you have it. 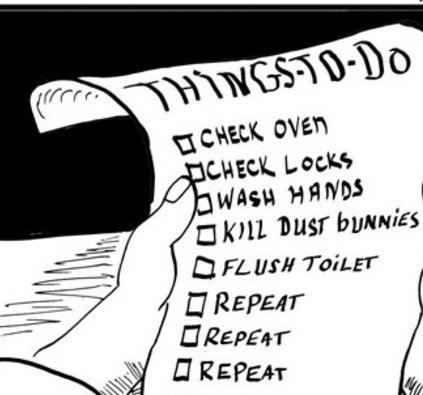